Rise of the Moderns Wiki
Register
Don't have an account?
Sign In
Advertisement
in: Structures, Rise of Nations

< Rise of the Moderns
Edit

The pinnacle of any Nation is the creation of a monument so great, so magnificent and awe-inspiring that it can truly be considered a Wonder of the world. 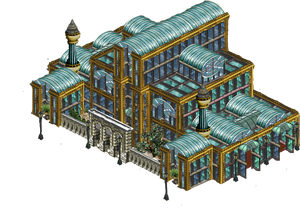 In Rise of Nations, these monuments are no less amazing than their real-life counterparts. As you can see from the bonuses listed below, wonders provide your Nation with a great many bonuses and are well worth the investment. You will also notice that each wonder has an associated point value. This value is used for scoring when attempting to achieve a Wonder victory — in certain games, you will win as long as you or your coalition maintain a wonder point lead over other factions for a certain period of time.

There are twelve wonders in Rise of the Moderns, spanning five eras. Three of them are free to be built by all factions, but the remaining nine are divided into "red" (militaristic) and "green" (civic) wonders, named after the type of governments required to research them: all told there are five red and four green.

The red ones are easier to obtain and spawn military units but are deficient in wonder points, whilst the green ones while costlier grant access to more technologies and also provide a higher wonder point boost, ant the cost of more restricted access — only in the late game are you able to obtain them.

Access to some of these wonders is restricted to the 24 factions of Rise of the Moderns based on ethnicity.

Community content is available under CC-BY-SA unless otherwise noted.
Advertisement